This may apply to other HP6xx or 7xx printers, but since I only have a 722C, I can't comment on any other series.

Problem: The banner switch is always on, no matter what position it is in. This causes problems with any kind of printing. Basically, I could not use the printer because of this. I have never ever printed a banner with this printer, yet the switch suddenly came on one day and there was no way I could fix it.

Solution: Open up the cover to the printer, look to the side where the banner switch is located, (left if you are facing the printer) and just wiggle out the plastic cable. See below. Your banner switch should then permanently be in the off position and should not cause you any other problems. Just keep the cable out of the way of the gears. You may have to restart your computer for the fix to work.

Special thanks to Tim Murray who came up with the simple pull the cable trick and also to Reid Trimble who posted on Usenet another fix (see below). 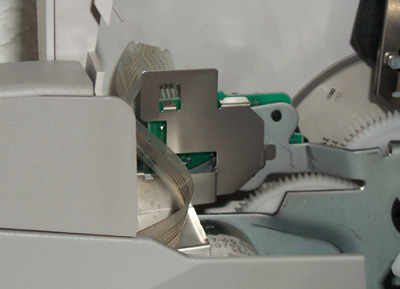 Reid Trimble posted this on Usenet, his fix will work, however I couldn't figure out how to release that latch and Tim came up with a simpler way anyways. But it was nice to find other people with the same problem.

I saved this note away from this group about 8 months ago (note that a
720 is virtually identical to a 722)...

Printer refusing to print: error message comes up when printing from
applications, saying that I have a paper mismatch ("The position of the
printer's banner lever does not match the setting in the software.")

Only problem is, the lever has never been moved. If I flick it up or down,
no light comes on - shouldn't a green LED be visible?

To complicate matters further, sometimes it prints - normally if I open a
document shortly after booting the system. If I print a document once, then
try and go back to do it again, it doesn't work.

No problems with two-way communication and no problems printing a test page.

A:
I had one of these in the office last week.  The owner called tech support
and they said these switches seem to go bad often.  I opened the printer to
take a look and scraped the switch contacts a little bit and its been fine.
If the printer is not in warranty it may be worth a try.  when you lift the
lid to change carts, there is a single torx screw that holds each side on.
take out the screw on the right side and it pivots out and down, there is a
latch in the front where the paper tray connects that is a pain to release.
Then you can open up the side of the paper tray where the switch is.  the
switch is up near the front where the lever is.  it is a couple of thin
metal
strips covered by a piece of clear plastic.